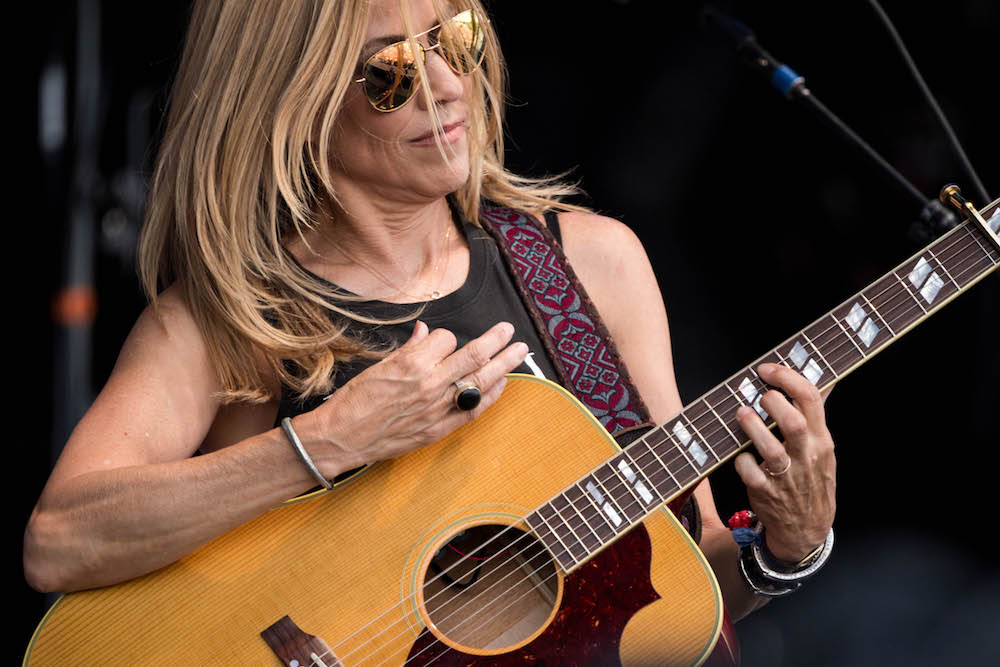 The Hall has always been slow to induct women, even relative to the fairly male-dominated field of rock history. The inaugural inductions in 1986 were all men, and the next year, only one woman was inducted. Since then, only one or two women or groups including women have been inducted each year.

The Rock Hall’s new chairman John Sykes, who took the reins from cofounder Jann Wenner this year, seems to understand the need for a change, both in the slate of inductees and in the organization itself.

“We have to rebuild our board in a way that reflects and speaks to the artists that are now eligible for induction,” he said in a recent Los Angeles Times interview. “That means more women and more people of color.”

Inducting all women in 2020 would send a great message, but even three women inductees in one year would break the previous record. This month, Hall of Fame voters will pick their nominees for the class of 2020, which will be narrowed down in December to the five official inductees.

If Hall voters wanted to heed Jackson’s call, they might consider choosing candidates from the following list of 10 women and or groups including women. All meet the eligibility standard, having released their first record 25 years ago or more, and have the strong discography, influence on other artists, and commercial success to warrant consideration. Many of them are years if not decades overdue for recognition.

We’ve even thought about which women could give the speeches to introduce each inductee. Read on below.

You might be surprised that Carole King isn’t already in the Rock and Roll Hall of Fame. In a way she is, but not really: She was nominated once in 1989, and then a year later, King and songwriting partner Gerry Goffin were inducted in the non-performer category, later renamed the Ahmet Ertegun Award. Most of the recipients of that award are non-musicians (DJs, managers, executives, and so on), and only a couple of them—Allen Toussaint and Quincy Jones—had successful careers as recording artists in their own right. So it seems increasingly insufficient to only recognize Carole King there, ostensibly for her ‘60s Brill Building songwriting work with Goffin, when she was also one of the biggest female solo artists of the ‘70s, with three No. 1 albums and a dozen Top 40 singles.

Although several all-female vocal groups are in the Hall of Fame, no instrument-playing bands comprised entirely of women have been inducted. ‘70s trailblazers The Runaways are less likely to get the nod since Joan Jett is already in the Hall, leaving it to the more commercially successful bands that followed in their wake in the ‘80s, The Go-Go’s and The Bangles. The Go-Go’s made only three albums during their multiplatinum new wave peak, and another reunion record in 2001. But the enduring appeal of bouncy hits such as “We Got the Beat” have helped them remain a popular touring act, with original bassist Kathy Valentine returning to complete the band’s classic lineup in 2016.

Suggested induction speaker: Pink, a child of the ‘80s whose rowdiest hits recall the way the Go-Go’s snuck a little punk energy into their most polished pop anthems.

In March, Stevie Nicks became the first woman to be inducted into the Rock and Roll Hall of Fame twice—for her solo career, and before that, for her role in Fleetwood Mac. Remarking on her accomplishment in her acceptance speech, Nicks was excited about the prospect of more women following her, saying, “Hey, man, I can do it! Now I’m telling all my friends … I’m going to give you all the directions.”

Of those already in the Hall, the woman who stands the best chance of becoming a double inductee is Diana Ross, who was inducted with The Supremes in 1988. Ross left The Supremes in 1969 and reigned over the ‘70s and first half of the ‘80s as a massive solo star, becoming bigger than ever in the disco era. With Ike & Tina Turner already in the Hall as a group, Turner could also get in a second time for her solo career. And if Ross or Turner gets in, more double inductees could follow, from The Eurythmics and Annie Lennox to No Doubt and Gwen Stefani.

Kate Bush was nominated for the first time two years ago, after more than a decade of eligibility. And British acts who were bigger at home than in the U.S. tend to have a hard time getting into the America-based Hall of Fame. (All of her albums charted in the top 10 in the UK; she never charted higher than No. 28 on the Billboard 200.) But Bush’s arty, ethereal, and idiosyncratic approach to singing and songwriting has been deeply influential to a couple generations of alternative artists on both sides of the pond, and there seems to be a new hit cover of “Running Up That Hill” every year.

With Janet Jackson joining her brother Michael as well as Madonna and Prince in the Hall this year, the late Whitney Houston remains the biggest pop superstar of the MTV era who hasn’t been inducted. Houston’s scant songwriting credits and lack of instrumental prowess put her at a disadvantage to be recognized by the Hall of Fame’s rockist standards of artistry. But there’s always been room for virtuoso vocalists such as Aretha Franklin, the first woman inducted into the Hall, and Houston’s five-octave range and definitive interpretations of songs like Dolly Parton’s “I Will Always Love You” made her perhaps the most revered pop vocalist of her generation.

Suggested induction speaker: Mariah Carey, one of Houston’s closest peers, who shut down rumors of a rivalry in 1998 when they recorded the hit duet “When You Believe.”

The Country Music Hall of Fame has been around longer than the Rock and Roll Hall of Fame, which might be why the latter has felt less compelled to induct artists from country than other rock-adjacent genres such as R&B, pop, and hip-hop. Although many of the ‘50s rock and rollers in the Hall had one foot in country, Johnny Cash is arguably the only full-on country artist current in the Rock Hall. And if a woman were to follow in his footsteps, it could be Loretta Lynn, whose 60-year career included controversial hits such as “The Pill” and “Rated X,” which pushed the envelope on country’s lyrical content. And like Cash, she teamed up with rock artists for a late-career comeback in 2004’s Jack White-produced Van Lear Rose.

Suggested induction speaker: Kacey Musgraves, who dueted with the coal miner’s daughter at the CMA Awards in 2014, and cited Lynn as a major influence on her Grammy-winning 2018 album Golden Hour.

There are currently five hip-hop groups in the Hall of Fame, and only one solo MC. Given the relative ease groups have had getting inducted, it seems likely that rap’s first female superstar duo, Salt-N-Pepa, will probably get a nod before we see Missy Elliott or Lauryn Hill up there. For a decade, they reigned as the genre’s top-selling women with hits including “Push It” and the socially conscious “Let’s Talk About Sex.” Spinderella, the duo’s DJ who eventually became the group’s third rapper, was recently fired by Salt-N-Pepa, but it’d be great to see all three of them patch things up and get inducted together.

Chaka Khan has been nominated for the Rock and Roll Hall of Fame a total of five times: twice as a solo artist, and thrice as a member of Rufus Featuring Chaka Khan, the group she rose to fame with in the ‘70s. Only two artists have been nominated more than five times without getting in (Chic and Chuck Willis), and the most nominated woman, Patti Smith, got in on her seventh try.

Between her decade with Rufus and her Ashford & Simpson-fueled solo career, Chaka Khan bridged the gap between R&B and dance music with  more than a dozen Top 40 hits, beyond a dozen gold and platinum albums, and collaborations with everyone from Stevie Wonder to Prince. “I’m Every Woman” has the potential to be a hell of an all-star jam at the induction ceremony.

Suggested induction speaker: Mary J. Blige, who covered Rufus’s “Sweet Thing” on her 1992 debut What’s the 411? and has said that the best career advice she ever received was from Chaka Khan.

Commercial success is not the only criteria or the most important criteria for induction, but it is a hall of fame after all, and household names take precedent. So influential cult bands who never sold millions of records but helped punk and alternative rock seldom get into the Hall of Fame, aside from the Velvet Underground and the Stooges. (The MC5 have been nominated four times, but never inducted.)

But as the Hall begins to fill up with the big alt-rock bands of the ‘90s, it would be nice to see some more ‘80s trailblazers get inducted, and few are more deserving than Sonic Youth. Bassist Kim Gordon, who’s releasing her first solo album this month, was the only woman in Sonic Youth, but she sang many of their most famous songs, including “Kool Thing” and “Bull in the Heather.” She was also among the women who sang in place of Kurt Cobain at Nirvana’s induction performance in 2014.

Suggested induction speaker: Carrie Brownstein, whose Sleater-Kinney cut a similarly uncompromising path from the rock underground to something like the mainstream.

The ‘90s were a boom time for female singer-songwriters boosted by alternative radio and the Lilith Fair, who either are eligible for the Rock and Roll Hall of Fame or will be within the next few years: Tori Amos, Bjork, Alanis Morrissette, Sarah McLachlan, and Liz Phair, among others. Out of that cohort, Sheryl Crow has the most Grammys (nine), and the most traditional classic rock pedigree, having self-produced several of her albums and jammed with legends such as Eric Clapton and Keith Richards. After the recent release of Threads, which Crow has called her final album, a Hall of Fame induction would put a nice cap on her career.

Suggested induction speaker: Stevie Nicks, two-time Hall of Famer and longtime friend and mentor to Crow, who appeared on her 2019 single “Prove You Wrong”