In: Videos, Music & Movies
With: 0 Comments 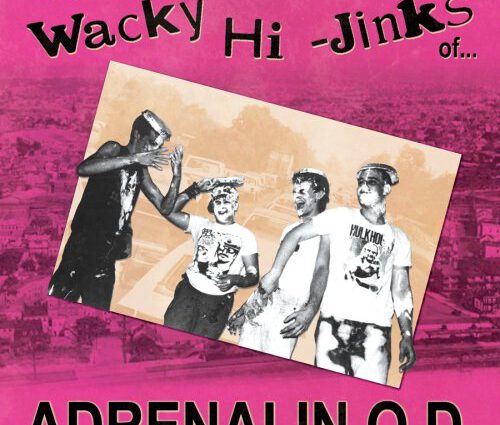 Over the years, Adrenalin OD’s 1984 LP The Wacky Hi-Jinks of Adrenalin OD has become a serious cult classic. Bands as diverse as NOFX, Screeching Weasel, Anthrax, Bouncing Souls, Night Birds, Municipal Waste and S.O.D. name them as a major influence. Wacky Hi-Jinks was originally released on AOD’s own Buy Our Records label, but now, to celebrate its 35th anniversary, it’s getting the Millennium Edition treatment from Beer City Records. This coincides with the New Jersey quartet becoming and active band again, and even doing their very first tour of Europe in 2020.

Adrenalin OD started out in 1981, and their first recordings were on the popular and now classic New York Thrash compilation that same year. (Back in the early ‘80s, the terms thrash and hardcore were pretty much interchangeable.) Their low budget six song EP, Let’s Barbeque, followed in 1983. Wacky Hi-Jinks was their first full length, and it really solidified their sound. What exactly was their sound? It was defined by two key elements: speed and humor. In other words, it was fast as hell and funny as hell.

Wacky Hi-Jinks was 15 songs in less than 24 minutes. The speed and intensity of the music was undeniable. Even 35 years later you can feel the energy and power pouring out of the grooves. It will probably make you want to jump around and smash things. As a matter of fact, if these songs don’t pump you up, it’s likely nothing will. Instrumental opener “AOD Vs. Godzilla” started out slow and heavy, like Gozilla’s stomp, before jumping to light speed. “White Hassle” told the pitiful tale of a late night trip to a certain notoriously bad 24 hour burger joint. Next up was the stark contrast of the extremely dark “New Year’s Eve”.

“Small Talk”, “Going to a Funeral” and “Corporate Disneyland” poked fun at the absurdity of modern life and social norms. Early Screeching Weasel and Bouncing Souls tracks clearly borrowed heavily from this formula. “Trans Am (The Saga Continues)” was the song that inspired the Dead Milkmen classic “Bitchin’ Camaro”. “Sightseeing” and “Middle-Aged Whore” lampooned the suburban, middle class lifestyle. You could definitely see the post apocalyptic lyrics of “World War lV” having a big impact on a young Municipal Waste. “Clean and Jerk” was the obligatory ‘80s punk, anti jock song.

On “I’d Rather Be Asleep”, not to be confused with the similar 1985 DRI song “I’d Rather Be Sleeping”, Adrenalin OD captured the boredom and restlessness of youth. “Rah-Jah!” even dared to attack beloved children’s icon Mr. Rogers! “Rock and Roll Gas Station” might have been AOD’s best known song, and 11 second album closer “Paul’s Not Home” was somehow a minor college radio hit. As great as the darkly comedic lyrics were, it’s important to remember that they were delivered at Minor Threat level intensity. You can easily hear that combination of sarcasm and near speed metal in the music of fellow New Jersey residents Anthrax and New York City neighbors Stormtroopers of Death.

Most punks over 40 are probably already familiar with The Wacky Hi-Jinks of Adrenalin O.D.. At least they should be. Honestly, it’s one of those albums that every self respecting punk should have in their record collection. The Beer City Millenium Edition faithfully reproduces the original from the master tapes, and comes complete with the same artwork and inserts. This press is limited to 1000 on three different colors. Don’t miss out on your second chance to own this undisputed classic from Adrenalin OD.

2019-10-24
Previous Post: In Memoriam: Sam Sadowski (Closet Fiends) has passed away
Next Post: The Nightlife Outlaws of East Los Angeles