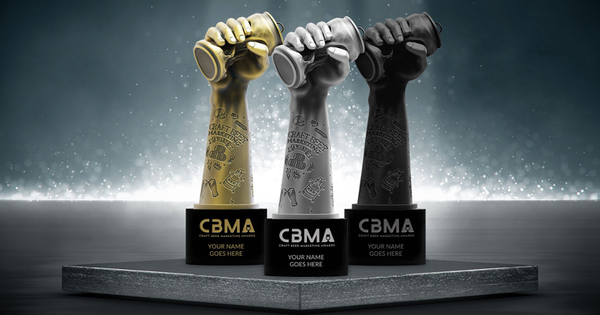 Established in 2019, the Craft Beer Marketing Awards (CBMAs) has officially launched its awards program. The 2020 awards are set for April 20, live from The Craft Brewer’s Conference (CBC) in San Antonio, TX.

Breweries, their agencies, designers, and marketing partners are invited to enter their top work. The 2020 CBMAS includes more than 30 categories that recognize all aspects of beer marketing, including best can, best use of social media, best merchandise design, coolest taproom and more.

“More than ever, breweries recognize the need to prioritize their marketing strategies,” says Prabh Hans, vice president of business development and strategy for Hillebrand, CBMAs presenting sponsor. “We’ve worked closely with brewers since 1984 and know that shelves and cities are flooded with an overwhelming amount of craft beer options. The CBMAs team recognized how much time and money these breweries are now investing into branding efforts and created a one-of-a-kind opportunity to celebrate them.”

The award series features categories that celebrate the very best of beer marketing and the teams, and individuals behind them, according to CBMA. All categories are judged by an influential and respected panel of beer, marketing, and design experts from across the country, including:

The aforementioned will join with others to create a 65-person panel dedicated to the judging of the more than 30 different awards that will be presented during this inaugural series.

Entries are now being accepted on the CBMAS website. Early bird deadline is November 29 and the final entry period ends January 31, 2020. Breweries and their marketing teams can enter work from January 2018 through September 2019. The judging process will begin February 13, 2020 and is set to conclude on March 20, 2020.

According to CBMA, the association was developed to recognize and award the very best marketing in the brewing industry across the nation.