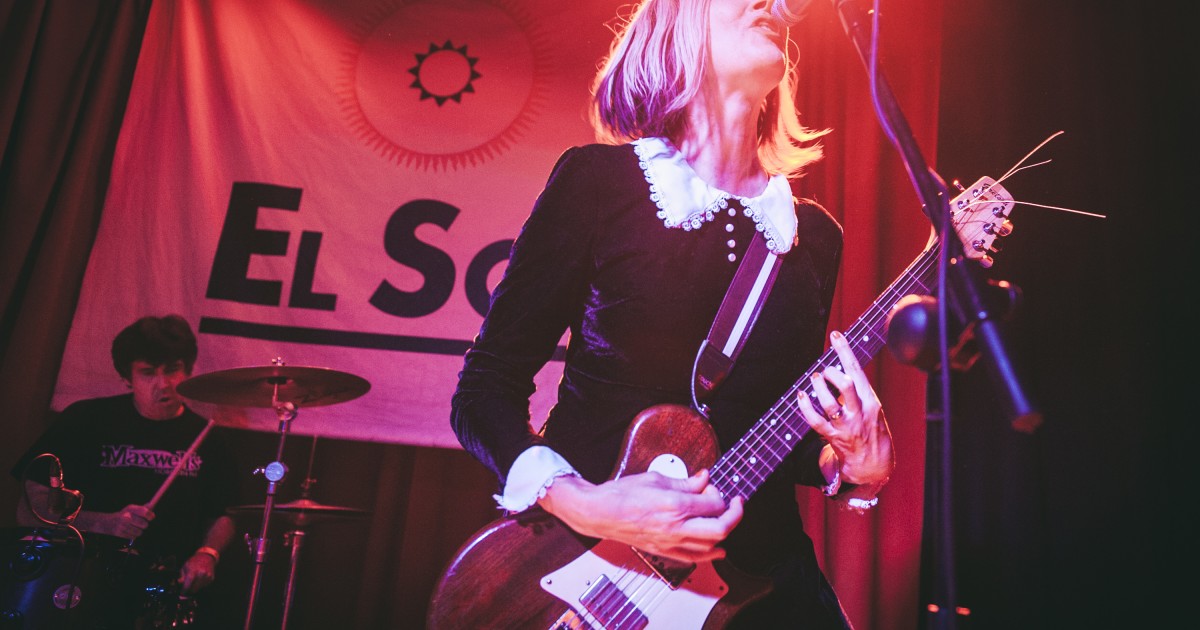 To wonder whether Kim Shattuck was beloved in the Los Angeles music community is to acknowledge that you never saw her onstage as a member of the Pandoras, the Muffs or the Pixies.

The moment Shattuck, who died Wednesday at 56, stepped before a group of people, be it at a party, onstage in a club or at an outdoor festival, the electricity and joy amped up a few notches. There was the warmth of her smile, which seemed to overtake the environment as she bantered between songs. But that was only part of it, as her peers in the band Veruca Salt noted in a Twitter post:

“How could anyone be such a brilliant pop songwriter, singer, screamer, and such a total punk-rock bad-ass, and be so insanely cute at the same time?”

Or, as expressed on the marquee of Sunset Strip rock club the Roxy after news broke of her passing: “Kim Shattuck Forever.”

Shattuck’s death was confirmed by her husband, Kevin Sutherland, who wrote in a social media post that the musician “passed peacefully in her sleep after a two-year struggle with ALS,” also known as Lou Gehrig’s Disease. “She will live with all of us through her music, our shared memories of her and in her fierce creative spirit,” he added.

That fierceness, along with a razor-sharp wit, was evident in nearly every Shattuck lyric, the majority of them written during her run as singer and guitarist for the Muffs. Whether she was celebrating the whoosh of a first-crush love or questioning the potential of her future self, she delivered her lines with a snide snarl that recalled Pete Shelley’s melodic complaints for the Buzzcocks.

“Will I fall or will I fly?,” she wondered in “I Wish That I Could Be You.” The roaring song “Outer Space” might be about metaphorically orbiting the earth, but it opens with a decidedly blunt invitation, “I’m pathetic now / Won’t you ride with me?” The Muffs’ cover of the new wave hit “Kids in America,” as featured on the soundtrack to “Clueless,” captured the sneering, disaffected energy of the grunge era.

The placement in that now-classic teen comedy was the closest the Muffs ever came to a mainstream hit. It was made possible through the band’s relationship with Warner Bros. Records, which signed Shattuck’s band in the early 1990s on the strength of a few independent singles.

Born July 17, 1963, and raised in Orange County, Shattuck had learned the art of performance a few years earlier as bassist for the Pandoras. The glammy L.A. garage rock quartet earned national attention as part of the so-called Paisley Underground movement for their mid-’80s run of albums for imprints Rhino and Enigma. Shattuck once said she’d faked her way into the Pandoras gig: Asked if she played bass, she wrongly told them yes, and then figured it out.

Punk rebellion wasn’t a trait she inherited, she told The Times’ Lorraine Ali in 1993. “I grew up around religious and elevator music. I didn’t know any better, so I thought music was kind of bland.” As she absorbed myriad sounds in her teens — the Kinks, the Flamin’ Groovies, the Plimsouls and others — she was drawn to what she called “really heavy guitar music,” but bored by “the long-winded songs that went with it.” Similarly, Shattuck liked pop music, “but was driven nuts because the guitars were so wimpy-sounding.” So she decided to put the two together.

Along with then-boyfriend Ronnie Barnett, Melanie Vamman and, eventually, drummer Roy McDonald, Shattuck formed the Muffs at a moment when underground rock, soon packaged as grunge, was overtaking the charts. The Muffs’ first single made a dent in a national scene bubbling with kindred spirits including soon-to-be label-mates Green Day, as well as Hole, the Pixies, L7 and Babes in Toyland. The Muffs’ second single was for Sub Pop, which had just struck pay-dirt with Nirvana and Soundgarden.

The Muffs pushed through a trio of albums for Warner Bros.’ Reprise imprint, working the pop-punk angles while Green Day’s breakout success — replete with the same punchy Rob Cavallo production sound he’d perfected a year earlier with Shattuck’s band — consumed their label’s attention. After leaving Warner Bros., the Muffs kept it at, issuing two Shattuck-produced indie records before splitting up.

RIP Kim Shattuck has passed after a battle with ALS. Immensely talented, inspirational, ferocious and sweet whether with the Pandoras, Muffs, Pixies or Coolies. An absolute icon. pic.twitter.com/vVDdIE1JiW

In 2013, Shattuck shot back into the spotlight when she joined the Pixies. The acclaimed indie rock band was looking for a bassist to take over for a departing Kim Deal, a key presence who was responsible for singing some of the Pixies’ most beloved songs. On paper, Shattuck seemed like a smart fit. But the Pixies are a notoriously reserved band, so much so that the new bassist’s joyful presence felt jarring alongside the other members’ seriousness. The band fired her within the year.

After Shattuck’s death, the Pixies posted on social media that they were “devastated about Kim’s passing,” adding that she was “a genuine musician, writer and performer who committed her life for the cause. She brought all of her life force to her endeavors and we are fortunate for her sharing some of that life force with us.”

That force drove a reunited Muffs to commit to new music, which begat “Whoop Dee Doo” in 2014. The band wrote and recorded their final record, “No Holiday,” over the last few years. It comes out Friday.

The aim, Shattuck said, was to rage gracefully into old age.

“When people get older, they get bitter or get cute,” she told The Times’ Todd Martens in 2014, adding that she’s been known to tell kids to get off her lawn. Still, Shattuck stressed, the Muffs had no interest in being “the bitter old man who’s screaming, ‘Kids these days!’ ” Rather, she said, “We want to be the cute old man on the corner feeding the pigeons.”