The Many Origin Stories of The Joker

In: Comix & Video Games
With: 0 Comments 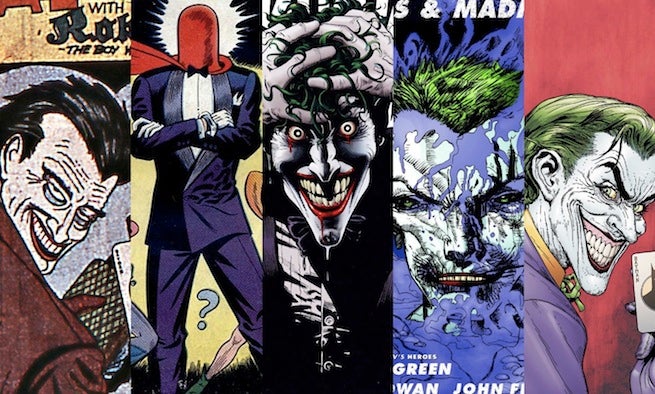 This article contains some spoilers for the Joker movie. We have a completely spoiler free review right here.

The Joker is probably the most recognizable supervillain in the world. Loosely ased on famed German actor Conrad Veidt in The Man Who Laughs, the Clown Prince of Crime’s unique look and penchant for elaborate, themed murder has left a giant mark in the public consciousness.  His real world origins are in dispute – Bob Kane claims the Joker was his creation, but Kane was so full of it that Jim Steranko, the legendary artist behind the groundbreaking Nick Fury: Agent of SHIELD, once went upside Kane’s head because Kane patted his face like some nobody kid. The general scholarly consensus is the Joker was created by Jerry Robinson and Bill Finger rather than Kane.

And while the Joker’s real world origins are disputed and nebulous, his in-continuity origins are generally pretty thematically consistent. The real variation comes from a creator’s fundamental view of the Joker: is he a character within the Batman universe? Or is he a primal force standing in opposition to what Batman represents? Or are you…whatever the hell Gotham was? Let’s take a look.

THE RED HOOD: VARIATIONS ON A THEME

Most Joker origin stories hit several of the same notes. A man is involved in a crime in a chemical plant, falls into one of the tanks, and comes out a crazed psychopath with chemically bleached skin and a shock of green hair, often with a permanent smile of some kind.

In most of those, the man involved is a flamboyant criminal known as the Red Hood. While the Joker’s first appearance was in 1940’s Batman #1, his actual origin wasn’t fleshed out for more than a decade. In 1951’s Detective Comics #168, it was revealed that a dapper master criminal in a domed red helmet was planning a heist at Ace Chemicals. He was caught in the act by Batman and Robin and dove into a catch basin full of chemicals to escape them. Those chemicals deformed him, turning him into an evil-looking clown, so he leaned into the gimmick and became the Joker.

This origin is the foundation for a lot of variations. In Alan Moore and Brian Bolland’s The Killing Joke, the unnamed man who becomes the Joker was originally a lab assistant at Ace Chemicals who took up the most dangerous job known to man, stand up comedy, to make extra money to support his pregnant wife. When that didn’t work, he then signed up with some mobsters to rob his former workplace as the Red Hood. After his wife died and he was forced to stick with the robbery anyway, he jumps into a chemical vat to escape Batman, with the usual results.

read more: Every Batman and DC Easter Egg in the Joker Movie

And in Scott Snyder and Greg Capullo’s “Zero Year” from 2013, the story is basically the same, only with the Red Hood being a gang of criminals instead of just one. It’s the mysterious Red Hood One, the leader but possibly one of any number of rotating primaries, trying to escape Batman by jumping into a vat of chemicals as a planned heist of Ace goes wrong.

There are small differences to each of these origins, but they’re all fundamentally the same – one bad day turns a regular person into a super-psychopath. It’s worth noting that two of the four modern movie interpretations of the Joker also go roughly down the “chemical bath” route. While we never learn the exact details, it’s a safe bet something along these lines happened to Jared Leto’s nameless Joker of the DCEU before Suicide Squad. But other big screen Jokers took a slight detour…

Tim Burton’s Batman from 1989 followed a similar premise, only without the Red Hood aspect. Jack Napier was set up by Carl Grissom, his immediate supervisor in the mob, to die in a robbery at Axis Chemicals. Napier caught on to the setup and killed Grissom, but falls over the side of a catwalk and is accidentally dropped into a vat of chemicals by Batman, who was trying to save him. There, we get the added bonus of a bullet ricochet scarring and paralyzing the facial muscles of the vain and handsome Napier, hence the permanent grin.

read more: What the Joker Controversy Gets Wrong

This is also pretty much what his origin was in Batman: The Animated Series. Jack Napier is referred to by name several times throughout the series, and a gangster who Bruce is convinced eventually becomes the Joker is responsible for the death of Andrea Beaumont’s father in Mask of the Phantasm. However, this takes some piecing together, because to the best of my knowledge, it’s only ever referred to and not directly shown.

WANNA KNOW HOW I GOT THESE SCARS?

Not every origin story for the Joker follows that pattern. Or any pattern at all, really.

Heath Ledger’s Joker is probably the one that is most solidly planted in the current popular consciousness. Christopher Nolan’s The Dark Knight very pointedly did not give a clear origin for the character, opting instead to present him as a force of chaos, a kind of psychotic antibody to the Batman’s rigid order. He gives two vastly different (and terrifying) origin stories at different points in the movie, one where his father carves up his face because he’s a violent drunk, and one where he does it to himself to make his wife happy after she gets her own face disfigured by bookies. We’re never told if either is true, but that’s the exact point the movie is trying to get across – it doesn’t matter where he comes from, just what he’s doing. The Joker in The Dark Knight is less a character, and more an elemental reaction to the existence of Batman.

read more: The Many Deaths of the Joker

Grant Morrison did something similar with the Joker in his epic run with the character in the late aughts. In the first, pre-Batman, Inc. part of the story, Bruce is led to believe that his father is still alive and a servant of the dark Bat-god Barbatos. One of the primary goals of the arc is for Morrison to weave together all of the disparate eras of Batman – the wackiness of the Silver Age, the grim and gritty Batman of the post Dark Knight Returns/Year One era, the street level guy who fights regular old murderers in the Golden Age.

Morrison really wanted the reader to understand that everything counts. In doing so, he set the Joker up as Batman’s foil – while Batman was using his Zurr-En-Arrh personality as an emergency backup, to reset and run on automatic while Bruce Wayne healed, the Joker was also resetting his own personality periodically. This Joker, he argued in a bizarre and wild prose issue (Batman #663, if you’re checking), was super-sane and would alter his own thoughts and methods to match the times. So for this Joker, nothing was true and everything was true at the same time.

Jerome Valeska is a violent, mentally ill anarchist son of a circus performer with a signature laugh. He kills his mom, confesses, and gets tossed into Arkham, where he inspires a cult. He and his cult escape, and they kill Sarah Essen to help someone run for Mayor, before getting killed by that Mayoral candidate to tie up loose ends. He gets resurrected by his cult, collects a team of supervillains, sows anarchy around the city, and dies again. In the process, he hoses down his identical twin brother Jeremiah with assorted chemicals, which turn Jeremiah insane. Jeremiah is a much more low-key serial killer, and in the last season, he gets tossed into a vat of chemicals making him even crazier.

read more: The Actors Who Have Played the Joker

It’s important to note that at no point were any of Jerome or Jeremiah or any of Jeremiah’s personality changes ever actively identified as the Joker. They just shared almost all of the Joker’s characteristics at varying points. And there was lots of laughing when they were around. Heavy allusions and all. Man, Gotham was a lot.

Arthur Fleck is a wannabe (and terrible) standup comedian who lives with his mentally ill mother. Awkward and shy, Arthur has some issues, including an unnerving laugh that has nothing to do with humor. Instead, a brain injury (brought on by years of physical abuse he suffered as a child) causes him to break out into fits of uncontrollable, mirthless laughter, which is sometimes seems painful, like a coughing fit. Lest you feel too sorry for him, Todd Phillips’ Joker movie makes it clear early on that Arthur leads an unhealthy (and thoroughly narcissistic) fantasy life.

Arthur reaches his breaking point after a mugging, the loss of his job, the continued deterioration of his mother…and a triple murder he commits on a subway car. His spiral continues as more facts about his past are brought to light, and he finally snaps, donning clown makeup (rather than something more permanent) and embracing his destiny. Of course, the movie offers a slightly ambivalent ending that makes it clear that, like Ledger’s conflicting stories, this may be only one of Joker’s POSSIBLE pasts…

Joker is in theaters now.