Juul, Under Heavy Fire, Pulls Fruit-Flavored Pods From US

In: misc SHIT
With: 0 Comments

In its latest effort to appease regulators, electronic-cigarette maker Juul said Thursday it would stop selling its creme-, fruit-, berry-, and mango-flavored pods in the US until the products have been reviewed by the US Food and Drug Administration. The company will, however, continue to sell its popular menthol-based flavors, including mint.

Juul has faced a number of public setbacks in recent months. The company is being investigated by the FDA, as well as the Federal Trade Commission, federal prosecutors in California, and several state attorneys general for advertising that allegedly misled users and made unverified claims about its products’ safety.

Adding to Juul’s woes, the e-cigarette industry has been under intense scrutiny since a mysterious vaping-related illness, now known as EVALI, spread across the US, sickening nearly 1,500 people and killing 33. Those illnesses—which are not linked to any specific company, product, or ingredient—have mostly hit people vaping THC, which Juul does not sell. But the outbreak spurred several congressional hearings on the safety of the products and increased pressure on e-cigarette makers to demonstrate their products are safe and do not target children.

Juul says it supports the FDA’s approval process. “We must reset the vapor category by earning the trust of society and working cooperatively with regulators, policymakers, and stakeholders to combat underage use while providing an alternative to adult smokers,” said Juul CEO KC Crosthwaite in a statement. Crosthwaite, who was named CEO in late September, previously was an executive at tobacco company Altria, which owns a 35 percent stake in Juul. 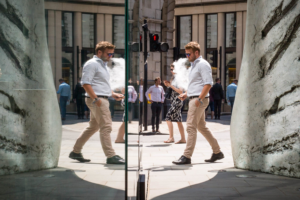 The company also has pulled all its digital, TV, and print advertising and stopped funding a ballot measure in San Francisco that would overturn the city’s ban on e-cigarettes, and it has stopped lobbying the Trump administration. Juul removed candy and fruit-flavored pods from stores in 2018, selling them only on its website, where buyers must be over 21 to purchase them.

Thursday’s announcement did little to reassure antivaping activists. In a statement, former New York mayor Michael Bloomberg, who is spending $160 million to stop teen vaping, said: “Juul’s decision to keep mint- and menthol-flavored e-cigarettes on the shelves is a page right out of the tobacco industry’s playbook.”

Many health advocates, including the Campaign for Tobacco-Free Kids, have called for a complete ban on flavored e-cigarettes. Continuing to market menthol and mint pods, they say, will do little to deter teen vaping, which has skyrocketed in recent years. According to the CDC, from 2017 to 2018, youth vaping increased by 78 percent. One in five high schoolers say they’ve vaped in the last 30 days. Meredith Berkman, co-founder of the group Parents Against Vaping E-cigarettes, says Juul’s decision will impact teenage vaping “not at all.” She says the announcement only “underscore(s) the continuing duplicity of Juul.”

In September, the Trump administration threatened to ban all flavored vaping products, including mint and menthol. One month and more than 500 EVALI cases later, the ban has not materialized.

FDA spokesperson Michael Felberbaum says the agency “intends to finalize a compliance policy in the coming weeks.” That policy would prioritize getting flavors that appeal to kids off the market. “The FDA plans to share more on the specific details of the plan and its implementation soon.”

Garrett Nelson, a senior equity analyst at CFRA Research, says mint and menthol account for 85 percent of Juul’s sales in US stores, where Juul is no longer selling fruit or dessert flavors. According to data from the 2019 National Youth Tobacco Survey, over 60 percent of high schoolers use mint-flavored e-cigarettes, nearly the same number as use fruit-flavored pods. Juul doesn’t disclose its online sales.

Outside the US, in countries like the Philippines, Juul’s mango and creme flavors are still available. In France, the UK, and Italy, the company continues to sell several fruit and dessert flavors including apple, berry, and vanilla.

This statement also doesn’t preclude Juul from reintroducing flavors in the US. In a statement, the company said it will “continue to develop scientific evidence to support the use of these flavored products,” which it says helps adult smokers quit traditional cigarettes.

2019-11-05
Previous Post: Every Single Person Who Has Resigned or Been Fired From the Trump Administration
Next Post: At the Qingdao Beer Festival, Where Beer Comes In Plastic Bags