The Keurig of cocktails is expanding sales to California

The $399 cocktail maker is roughly the same size as a Keurig coffee machine. It uses a mix of water and carbonation to create single-serve drinks from Drinkworks cocktail pods, which are available in packs of four for $16 each. The selection varies from simple cocktails like vodka soda with lime to more complex drinks like mojitos, Long Island Iced Teas and more. Drinkworks also offers Stella Cidre pods and offers a selection of Bass and Beck’s beers.

Each plastic pod contains all the alcohol and additional ingredients you need for each cocktail, such as lime juice for a margarita or cream for a White Russian. Printed on the back of each pod is a compressed barcode that tells the machine whether it’s sangria, a gin and tonic or another type of drink. The machine reads the barcode and then performs a set of actions for each drink, adding a specific amount of carbonation and water — or in the case of non-fizzy drinks like the Whiskey Sour or Old Fashioned — no CO2 at all. The machine has a removable water reservoir and relies on removable C02 cartridges, which you will need to replace every few months depending on how often you use it. A touch display tells you the size of the drink and what kind of glass is needed. The machine also connects with your smartphone and has a companion app, which allows you to check water temperature, CO2 levels, order drink accessories and more. 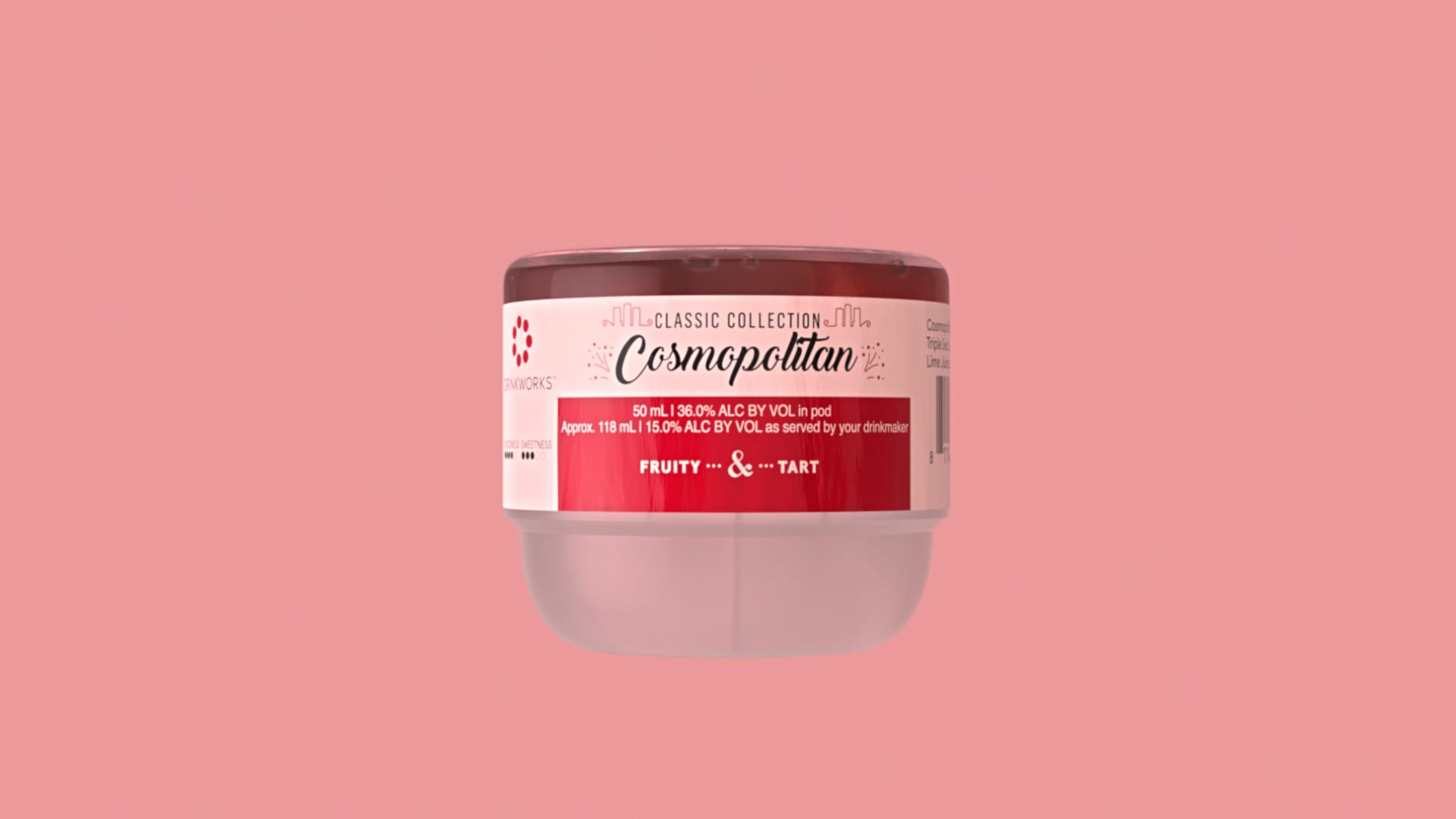 I was able to try out the Drinkworks Home Bar for myself at a demonstration. Using the Drinkworks machine is easy enough. You insert the pod into the dispenser and place the appropriate glass underneath the spout. The machine can whip up most four-ounce cocktails in around 25 seconds, while taller drinks take slightly longer. I tried a variety of drinks, including the Moscow Mule, margarita and White Russian. While the drinks were good enough, they lacked a certain boost that fresh ingredients and ice would have provided. They tasted like the cocktails you receive at places where most people know not to order cocktails, like sports bars, movie theaters and mid-range chain restaurants. In other words, they tasted fine.

But what kind of consumer would pay $399 for a cocktail machine that makes just adequate cocktails, when they could pay $12 or more for a much better version mixed by a professional? Keurig coffee drinkers are easy to pin down as a group. Customers are often busy professionals who value the ease and convenience of a morning cup of coffee in seconds. Similarly, a cup of Keurig coffee tastes adequate, but is never mind-blowing. But while most often see downing a cup of coffee as a necessity — a jolt of caffeine consumed in the morning — will they have higher standards for cocktails?

Drinkworks CEO Nathaniel Davis said “generous hosts” were the ideal consumer. “They are people who tend to enjoy a drink on their own or with their partner at home. They tend to not be heavy drinkers, but may enjoy a cocktail to wind down every day. They just value choice. They like to have people over,” said Davis in an interview with Engadget.

Frederic Yarm, a Boston bartender and cocktail writer, felt mixed on what such a machine could offer to the average cocktail drinker. While the technology no doubt offered a great deal of convenience for consumers, some of the more advanced drinks that Drinkworks offered would be better handled by a skilled bartender. “The flavored gin and tonic sound like a great example of how this technology can provide a solid result, whereas the margarita without a way to provide fresh citrus juice is very much a step down,” wrote Yarm in a message to Engadget.

Meanwhile, machine-made beer might not be too far from what you order at the bar anyway. “The beer aspect is not too dissimilar from the way many large breweries make macrobrews where they brew a stronger beer and dilute it later to proof to maximize the brew kettles, fermenting space, and lagering tanks,” said Yarm. He added that such a process — favored primarily by large brewers — is still several steps away from where the craft beer movement is going.

Drinkworks has had a gradual release due to varying state statutes on alcohol sales, but hopes to eventually be available nationwide. At present, only customers in Missouri, California and Florida will be able to purchase the Keurig Drinkworks Home Bar machine and pods. California residents can pre-purchase the machine online today, and fulfillment will begin on September 30th. The machine, which is normally $399, will be available for $299 until October 1st, 2019.