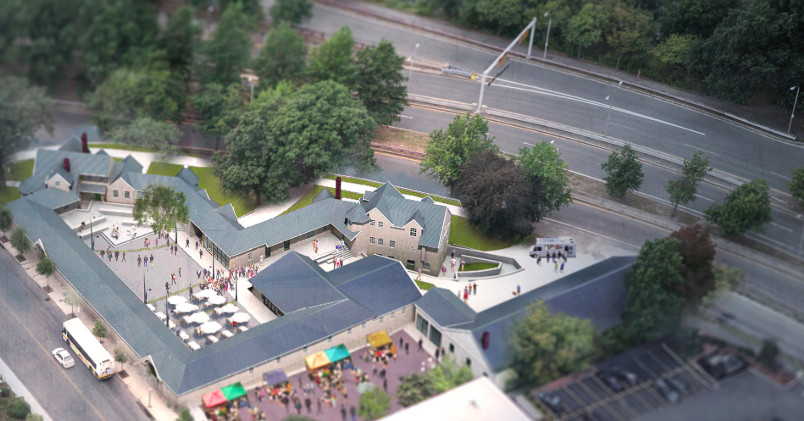 As Harvard continues to take over Lower Allston, more change is in store a bit further down the river at the former Charles River Speedway Headquarters administration buildings in Brighton. The historic buildings will undergo renovations in the coming months, becoming home to a project called the Speedway, meant to be a destination for dining, shopping, and drinking, the Speedway team announced today.

Though the Speedway hasn’t explicitly used the term “food hall” in its initial announcement, the project seems to fit under the umbrella of the Boston area’s exploding food hall scene, bringing together a variety of food and drink vendors in one area with communal seating and other shared amenities. Projects like these have boomed in Boston in recent months, with more to come, starting with the opening of Time Out Market Boston in Fenway in June. Two more are expected to open later this year or early next (with even more on the horizon later): Hub Hall at the almost-ready Hub on Causeway development next to TD Garden and High Street Place in Boston’s Financial District downtown.

In addition to a lineup of food vendors, the Speedway will also have a full-service restaurant, event and office space, small retail shops featuring local artisans and makers, and a brewery. The Speedway has signed on Salem’s Notch Brewing to anchor the development, which will ultimately span 17,000 square feet overall with an 8,000-square-foot courtyard.

Notch is the first announced vendor for the Speedway. Founder Chris Lohring had teased an eventual second location for the brewery in mid-September, without revealing any specifics at that time. Its space at the Speedway will include a beer garden and outdoor seating. Notch has been around since 2010 (its Salem taproom is about three years old) and is best known for its focus on session beers that have an ABV of 4.5 percent or lower.

“We’re thrilled that our second brewery and tap room will anchor this historic renovation,” Lohring said in today’s press release from the Speedway. “The Speedway is the perfect location for this expansion — it’s distinctive, historic, and we have great partners. I can’t wait to pour the first liter and celebrate with our new community.”

Set to open in the summer of 2020, the Speedway is a collaboration between the Architectural Heritage Foundation and the Massachusetts Department of Conservation & Recreation’s Historic Curatorship Program. The buildings will be rehabilitated and renovated while maintaining historic elements.

The buildings are situated at 525 Western Ave., where they once supported the Charles River Speedway, which was a mile-long racetrack that first opened in 1899. Construction is already underway, with an official groundbreaking ceremony scheduled for October 24. Stay tuned to the Speedway’s social media for progress updates.